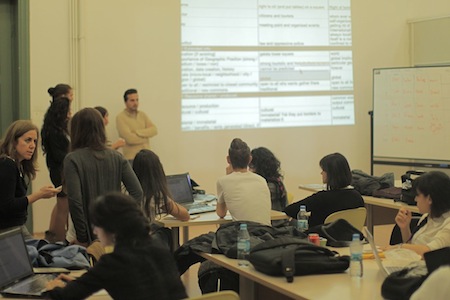 First part. Introduction to the theory

The first one is the discussion of the notion of the commons based on the literature, mainly Negri & Hardt’s Commonwealth thesis. Working in smaller groups, every group select a set of commons and they present it later to all the participants. Those first commons are added on a draft map. After extensive discussion with the rest of the group some of them were selected to be researched further. The second step consists in adding parameters to the selected commons. The basic ones being name, actors, way and conflict. Name defines the common discussed, actor the group of actors trying to maintain the common, way the way through which the actors are trying to maintain the common intact and conflict defines the way that common is threatened. A more extended definition includes parameters to define as: wealth, benefits, rents generated (direct, if any); scale (micro-local, neighborhood, city, region, global), open to all, restricted to closed community and more. The last step was the production of a short video of about 3-5 minutes to explain and depict each common. The videos are produced by small groups but sharing the initial credits. Its stage of editing was discussed by all the participants. The videos were added to interactive digital map using the platform meipi as online software.